The Chateau was classified as an historic monument in 1973

The château of Loumarin was built in 3 stages:

– A fortress  built in the C12th and C13th by the Baux family of which little remains.

– The part called the “Château Vieux” or Old Château built in the C15th by the Agoult family who were the Barons of Sault and Forcalquier.

– The Renaissance wing called the “Château Neuf” or New Château was built in the C16th by Blanche de Lévis-Ventadour for her son François   d’Agoult, who was a page at the court of François the First, during boyhood.

When Henry IV put an end to the religions conflicts, the Counts of Agoult left the château of Lourmarin. In the middle of the C17th, it passed by marriage to the Lesdiguières family and then to the Villeroys. In the C15th, the Baron of the Tour d’Aigues became the owner of the château.

During the French Revolution, the château was in the hands of the famous French inventor, native of Lourmarin, Philippe de Girard among others.

In 1920, Robert Laurent Vibert, an historian and industrialist, bought the château to save it from demolition. With a group of friends and workmen from the village he restored and furnished it. Unfortunately, Laurent Vibert was killed in a car crash in 1925, but he left the château, his art and furniture collections, and his libraries to the French Academy for Art and Science in Aix-en-Provence, on condition that they play host every summmer to young writers, painters, sculptors and musicians in the château. 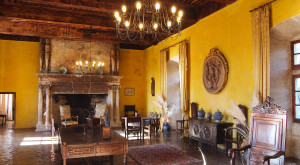